Are you spending way too much time in the gym?

Perhaps you’re just looking to add some more weapons to your training arsenal?

Or, maybe you just want to shake things up a bit?

Either way, antagonist paired sets will do the trick. Not only are they massive time savers, but they’re an incredible tool for increasing performance. Not to mention, they provide an insane muscle pump (at least in my experience) and are, in my opinion, a more enjoyable way to train smaller muscle groups.

Now before we jump right into APS training, let’s briefly go over the main muscle-groups and their antagonistic pair.

Antagonist: A muscle whose action counteracts that of another specified muscle. 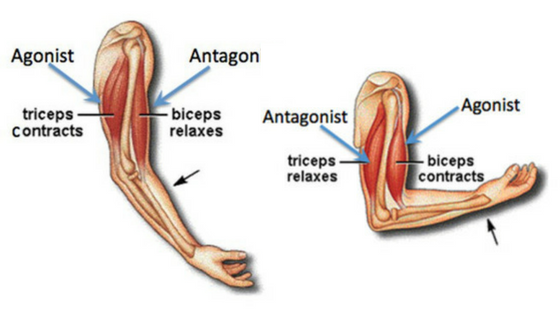 The chest and back work in a similar fashion as well; and the same goes for vertical pushing and pulling (think overhead press and pull ups).

Antagonist Paired Sets: These are essentially just back to back exercises that target the opposing muscle groups (i.e. biceps/triceps, hamstring/quads, etc.).  The antagonist paired set—or APS—is executed by performing one set of a given exercise, and then immediately following it up with an exercise that targets the antagonist muscle of the first set.

Now, I’m sure you’re familiar with this type of training as it’s been highly popularized in the bodybuilding world as “supersets”; however, there is a difference. For instance, supersets—although performed in the same manner—typically alternate between exercises that target the same muscle-group. APS, on the other hand, target the opposite muscle-group on the second exercise—an important distinction. (Read This: 5 Beyond Failure Sets for Big Gains)

You see, when you pair your sets with the same muscle-group, you inhibit your ability to increase performance. Have you ever done 50 pushups on your first set and then couldn’t get more than 10 on the second? This is due to the fatigue that sets in to the muscle from the high amount of repetitions.

When you pair the opposite muscle-groups, however, not only does it not negatively impact your performance, it increases it.

Think about it: let’s imagine you’re pairing triceps pushdowns with dumbbell curls. When you’re performing your pushdowns you’re using the triceps, then you follow them up with curls. When you’re curling, you’re essentially resting the triceps while you’re working the biceps. But because you’re still moving the triceps through their full range of motion, despite them not actively contracting against resistance, it produces a sort of active recovery effect that can improve performance when performing your pushdowns again. In fact, this was shown in a 2010 study published in the Journal of Strength and Conditioning Research, where they compared paired sets to traditional sets and concluded that PS may be more effective than TS in terms of volume load.

Because the goal with APS is not to fatigue a specific muscle, but rather, to increase performance, it’s important that we execute them with that intention. A 2014 study on rest intervals between paired sets concluded that more repetitions are performed when the rest period is approximately 60 seconds between sets on opposing muscles. This, however, was based on isolation movements where there is less total body fatigue. Pairing compound exercises may require longer rest periods.

Science says we can expect to increase performance by performing antagonist paired sets with a bit of rest in between exercise, and my experience with APS suggests the same. This is not to say that one should train, primarily, using antagonist paired sets; however, the hyperbole associated with super-sets should not deter you from implementing APS.