Building muscle isn’t complicated, but it’s not easy – especially when we’re stuck, spinning our wheels like a truck in the mud, hoping and praying that this next program or this new diet is the solution.

But as you’ve seen in the past, it never is.

If you’re busting your ass in the gym, 5 days per week, chugging protein shakes like they’re going out of style, and still can’t fill in a small t-shirt, then these 10 mass building tips are for you. 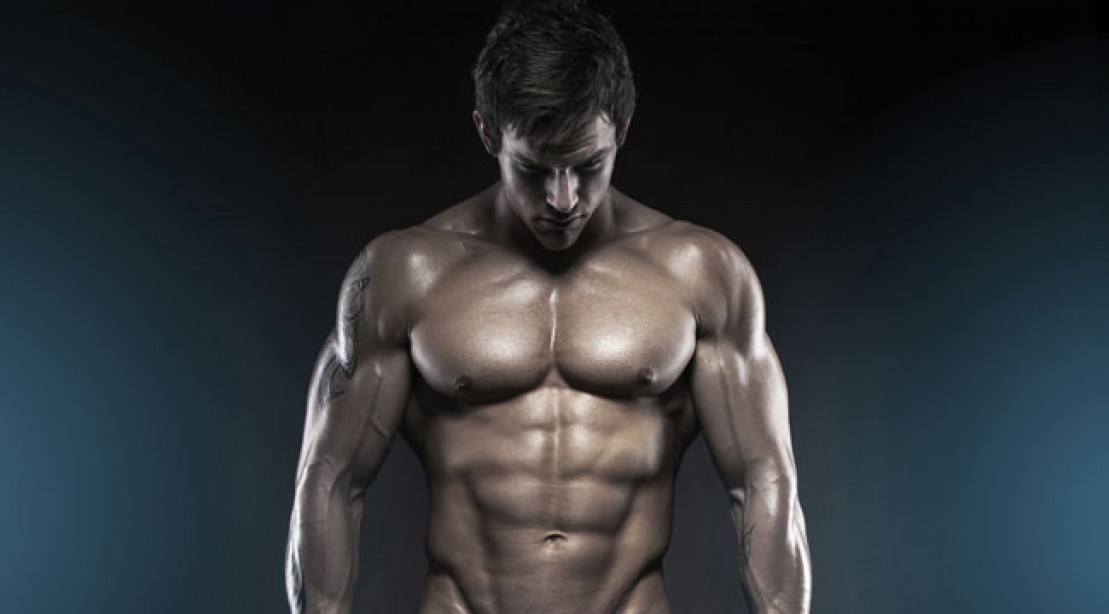 I don’t care how great your training program is or how consistent you are - if you’re not supplying your body with the necessary resources to grow, you won’t build muscle.

No matter how many protein shakes you chug, if the nutrients needed to build tissue aren’t available, growth cannot occur.

There is one way to ensure you are eating enough, and one way only: eating in a caloric surplus.

If we can manage to consume more calories than we are expending, we’ll grow. If not, we won’t. It’s that simple.

And before you say “I can’t build size no matter how much I eat”, understand this: you, my friend, do not defy the laws of thermodynamics. Particularly the first one: energy balance.

“energy can be transformed from one form to another, but cannot be created or destroyed.”

So if you’re not moving the needle on the scale, eat more food. (Read This: How to Calculate Macros for Mass Building)

Lifting weights is not about how much you can withstand the burn from lactic acid buildup. It’s not about how sweaty your shirt is when you walk out of the gym. And it’s certainly not about how big you can make yourself appear with a “savage” pump.

One study published in the Journal of Strength and Conditioning Research took 18 experienced lifters and randomly assigned them into 1 of 2 groups; the first group was performing 25-35 reps and the second stayed within 8-12. Both groups performed 3 sets of 7 different exercises, 3x per week. Researchers found no significant differences in muscle mass between the 2 groups; however, they also found the higher load group (8-12) made significantly greater strength gains.

Now I know what you’re thinking…”you said to train heavier and then referenced a study showing light weight produces the same amount of muscle as a heavier load.”

You missed the point: it took the lighter load group 3x the work to achieve the same amount of muscle growth and far less increases in strength.

So sure, you can build muscle with lighter load training, but you’re going to have to do 3x the work.

Now let’s look at what happens when we equate for volume.

What does this mean? Intensity matters. Lift heavier weight!

The main pathway by which we build muscle is progressive overload: a gradual increase in volume, intensity, frequency or time in order to achieve the targeted goal.

In layman’s terms: if we want to get bigger, we have to get stronger.

When’s the last time you saw a guy with monster quads who could only squat 135? Never!

Here’s why: the way we build muscle is quite simple. We introduce a stress and our body adapts to it by building muscle in order to handle it again in the future. Mind blowing, I know.

So before you ask yourself why your chest isn’t growing, first ask yourself how long you’ve been pushing 185 on the bench.

This is why I recommend that you write shit down.

At first, it’s simple. Every week you’re slapping another 5-10 pounds on the bar – that’s easy to track. But as you get further into your lifting career, the rate of progression, inevitably, slows down. This is where tracking your lifts becomes imperative because if workload (sets x reps x weight) is not increasing, muscle growth is not occurring.

The simplest ways to increase workload are the following:

“What about increasing the number of sets? – surely doing an additional set will increase workload”

Sure, this can be done, but not only is it not practical, studies show that it’s only possible to a certain degree before we experience diminishing returns.

A study that was published in The Journal of Strength and Conditioning Research compared training 1 day per week using a split body workout vs. 3 days per week using a full-body approach. Researchers found that subjects who trained a single muscle-group more frequently throughout the week, despite no changes in total volume, experienced significantly more muscle growth than the low frequency group.

A more recent meta-analysis on the effects of resistance training frequency for muscle growth concluded that, and I quote, “the current body of evidence indicates that frequencies of training twice a week promote superior hypertrophic outcomes to once a week.”

This, in my opinion, is due to 2 main factors:

Although this effect does still require an adequate rest period between bouts, training more frequently will increase your ability to recover and adapt.

Studies like one published in the Canadian Journal of Applied Physiology suggest that MPS is more than doubled at about 24 hours following an intense training bout and then drops back to baseline about 36 hours.

Let’s refer back to the study I referenced earlier that compared low rep, intermediate rep, and high rep training. Another interesting find was that the low rep group experienced greater strength gains than those training with intermediate and high reps.

This, however, should not come as a surprise since mechanical stress training has already been shown to be superior at increasing strength.

And because of the fact that with strength comes size, it only makes sense that we train with heavier loads for lower reps…right?

Well, although that may be a viable option, one study comparing linear periodization to daily undulating periodization (i.e. focusing on one intensity for 4 weeks vs. alternating intensities, daily), found that varying rep ranges/intensities, regularly, elicited greater strength gains than traditional block periodization.

So if you want to gain the most strength in the shortest amount of time, start undulating your rep ranges/intensities, daily.

Someone who runs a traditional upper/lower split, for example, will train as follows:

Read This: High Reps VS. Low Reps for Size and Strength

Make no mistake, pushing yourself in the gym is absolutely necessary. 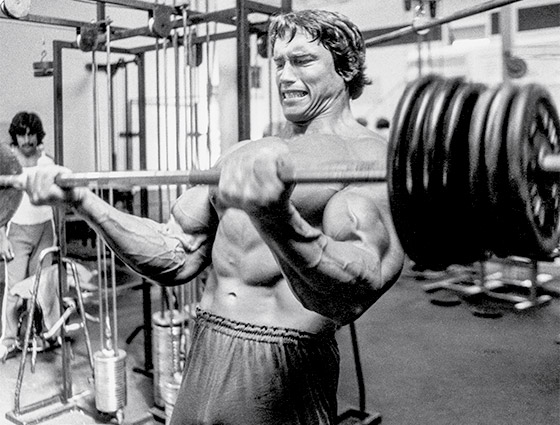 Doing it in a way, however, that will allow you to make the most progress is the key.

If you’ve read this far then you know that there is no substitute for progression, and that if it’s not occurring, you’re not growing.

So although Arnold’s theory that “the last 3-4 reps is what makes the muscle grow” may have some merit, it can easily be misinterpreted and, if misused, can become the worst advice you take.

Let’s look at it from a practical standpoint…

According to your program, you’ve got to squat 315 lbs for 3 sets – here’s what it looks like when you’re training to failure.

Do to cumulative fatigue, you’re getting fewer reps each set. Not only did you hinder your performance in the squat, but you’ve made yourself useless for the remainder of the workout.

Now let’s look at how your squats may have gone, had you been a bit more conservative and used a target rep count according to your 1 rep max.

Because the level of muscular fatigue is much less, the following sets do not suffer. Not only will you have increased the total workload on squats, but the remainder of your workout will not have been in vain.

Percentage-based training is a method by which we use a percentage of our 1 rep max to determine the weight we will use on a given lift.

The case I made for not squatting to failure is a prime example of why percentage based training works well. Not only will you train for progression – not fatigue – but you’ll walk into the gym, each session, with a concrete goal.

Increasing your deadlift, every week, for the next 3 months is doable. Achieving the same with lateral raises, on the other hand, isn’t likely.

You see, adding 20 pounds to a 400 pound deadlift is but a measly 5% increase. Adding even just half of that to 20 pound lateral raises, however, translates to a whopping 25% jump in weight.

I mean seriously…when’s the last time you saw someone strict curling 80 pound dumbbells?

This is why I recommend strategically including extended sets (e.g. drops sets, rest pause training, forced reps, etc.) when progression has slowed down – particularly on smaller isolation lifts like biceps curls and lateral raises.

If you’re saying to yourself, “all of the extended sets he mentioned require that we train to or even beyond failure”, you’re correct. Thank you for paying attention.

Although you may train in an intermediate rep range when performing your smaller isolation lifts, quite frankly, they’re not going to be nearly as taxing as your larger compound exercises. In fact, when working with less intensity, training to failure has its benefits. So if you’re at a point in your training where you’re finding it nearly impossible to progress using the techniques I’ve outlined earlier – specifically with smaller, less intensive exercises - extending your sets may be your best option.

Earlier we discussed the importance of eating enough – unless we do, we’ll never grow.

But the truth is, most people are eating enough, they just don’t know it.

You see, our weight can fluctuate, daily, do to many factors (i.e. sodium intake, water retention, sleep, stress, etc.). This is why choosing 1 weigh-in day per week can be misleading. It’s very possible that you weigh-in at 151lbs on Friday, 149.8lbs a week later, and be tricked into believing that you’re not eating enough. This is why I recommend daily weigh-ins and tracking weekly averages.

The individual who weighed in 1lbs lighter, a week later, could have very well been gaining weight, but due to fluctuations in water weight, wouldn’t have known unless they tracked averages.

Are you eating enough? Here’s how to tell.

If the average weigh-in has increased, you’re eating enough.

If the average weigh-in has remained the same or decreased, you need more calories.

We live in a time where every move we make is predicated on how we want others to perceive us. This leads to more people in the gym – because they get to share it on Facebook – but less people actually training.

We’re so worried about getting a pump so we can snap that next selfie for social media that we forget why we’re here (in the gym) in the first place. If that isn’t bad enough, we spend the rest of our session glued to our phones, refreshing our feed to see how manly “likes” we got on Instagram. Forward an hour later, and we’re leaving the gym without the slightest clue of how many sets, reps, or how much weight we lifted.

Showing up to the gym is a very small part of an extremely large equation. It’s not about how much time you spend in the gym, it’s about how you spend it.

Be present. Do work. Get big.

Did you find this article helpful?